Skip to main content
Women and Social Movements »
How Did a Multi-Racial Movement Develop in the Baltimore YWCA, 1883-1926? 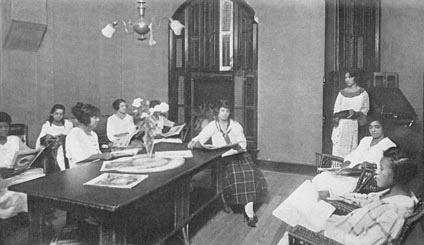 Documents selected and interpreted by
Kimberly Crandall Bowling under the direction of
Professor Kriste Lindenmeyer of the University of Maryland, Baltimore County, May 2002

Project revised and edited by Thomas Dublin
Thanks to Adrienne Lash Jones for editorial and interpretive assistance.

During the late nineteenth and early twentieth century, Baltimore followed many of the same patterns as other industrializing cities throughout the United States. As factories grew in size and number in Baltimore, rural migrants, primarily from Maryland, Virginia, and Pennsylvania, flocked to the city. Additionally, immigrants, mainly from Europe, flooded the city in search of a new life.[1] Similar to other cities, Baltimore was often unable to provide even the most basic services to the new city dwellers. The problems faced by city governments were complicated by the rapid increase in population. As Robert Wiebe argued, "Each city desperately needed such fundamental services as fresh water, sewers, paving, and transportation, yet the same conditions that made the need so imperative diminished the capacity to meet it."[2]

Women often arrived in the city alone. They were what historians call "women adrift"--independent wage-earning women with little or no parental supervision.[3] Some came to find jobs in order to send money home to their families. However, a growing number sought jobs to support themselves. Young unmarried women sometimes came to the city alone because their families could no longer afford to support them. Many, however, had left home in search of some independence. Baltimore provided jobs, and some factories even provided housing for such workers.[4] However, as the flood of people seeking work grew, jobs and a place to stay became increasingly hard to find. Additionally, the increasing popularity of saloons and dance halls concerned many middle-class women. It was believed that without familial support, young women would certainly fall victim to the many vices the city presented.[5] White middle- and upper-class reformers interested in helping these young women came together to form the Baltimore Young Women's Christian Association (YWCA) in 1883. Their primary goal was to fulfill their evangelical duties to the community. But it is also important to see the YWCA as a response to urbanization. One of the primary goals of the association was the assimilation of newcomers to life in the city--whether rural migrants or foreign immigrants. Historian Daphne Spain claims the YWCA thus complemented the work of settlement houses in assimilating immigrants as it evolved from an early proselytizing agenda.[6]

Middle-class women began to view it as their duty to evangelize and at the same time preserve the "purity" of young working-class females. They worried about the lack of spiritual direction and parental supervision, as well as limited safe and affordable housing. The city also seemed to offer a dearth of "wholesome" recreation to compete with the temptations of growing urban amusements that they believed would corrupt vulnerable young women. In 1870, a group of middle-class women in New York City organized what became known as the Young Women's Christian Association of the City of New York.[7] Reformers in other cities across the country copied the New York model; for their part white women in Baltimore sought to meet the spiritual and physical needs of immigrants and working class within urban enclaves (see Document 1). The YWCA offered Bible study groups in order to fulfill that goal. However, the YWCA soon became more secular in nature, providing aid to travelers, a cafeteria, library, medical care, educational programs, and even a vacation camp. Additionally, most wage-earning women could not support themselves and pay the charges in private boarding houses. Thus the Young Women's Christian Association stepped in to provide inexpensive housing.[8] In this respect the Baltimore YWCA followed the pattern of other YWCA's across the country.

The women who organized the Young Women's Christian Associations were generally upper- and middle-class, native-born Americans who were not required to do wage work. Association volunteer work gave many of them a sense of purpose and fit very well with the socially accepted roles for women in the Gilded Age and Progressive Era. The obvious needs of working-class women prompted female reformers to enter what was considered the public world of men. Daphne Spain identifies the sphere of club women as "`parochial'--the world of the neighborhood as opposed to the totally private world of the household and the completely public realm of strangers."[9] Association work became an extension of the home and therefore fell within woman's sphere. By redefining what was public and what was private, middle-class women created a new and more visible role for themselves. In addition, they justified their volunteer efforts in religious terms, thereby allowing them to take a more public role. The goals of many women's reform movements were steeped in the language of evangelical Protestantism. Many held that Christians had a Biblical mandate to care for those less fortunate than themselves. This idea prompted many white middle-class Protestant women to join organizations such as the YWCA.[10]

The Baltimore YWCA worked principally among white working-class women. Racial segregation was a part of Baltimore urban life at this time. While the documents brought together in the first part of this project (documents 1 through 18) are silent about African Americans, it is likely that black women did not participate in activities that the city's central YWCA sponsored. Black middle-class women, however, recognized that their working-class sisters also needed help, and stepped into this vacuum. In 1896, a group of Baltimore African-American women founded the Colored Young Women's Christian Association (CYWCA) (see Document 19). The date for this event suggests that the founding of the CYWCA was a part of the racial uplift activity associated with the emergence in the mid-1890s of the National Association of Colored Women's Clubs. (See the document project, "What Gender Perspectives Shaped the Emergence of the National Association of Colored Women, 1895-1920?" also on this website.) If the Baltimore experience paralleled that in other cities in this period, black clubwomen probably played a major role in the emergence of the Colored Y.[11] While it is unclear from the documents how much white and black women activists worked together, we can see that the language used by the founders of the CYWCA echoed that used by the YWCA (see Document 20). These two organizations expressed almost identical concerns and goals.

Still, because black women in this period had such a different place in American society than did white women, we cannot view the two reform efforts as identical. Glenda Gilmore discusses the importance of the CYWCA to black women, pointing out the unique position of African-American women in turn-of-the-century cities. She asserts that far more black women than white women worked for wages and notes that "the YWCA provided a forum where middle-class black women could demonstrate genteel leisure activities, teach domestic skills, and act as role models embodying the possibilities of the African American woman."[12] Black women's concerns about racial uplift and the appearance of black working women in the eyes of dominant whites meant that Y work for blacks took on a civil rights component that was lacking in white Y work. As Adrienne Lash Jones, has pointed out African-American women active in the Colored Y movement also had to struggle for acceptance by their white reform sisters. While this broader issue is not visible directly in the documents employed in this project, one can infer similar processes at work within Baltimore as those Jones has explored in her national treatment of YWCA affairs.[13]

The Baltimore CYWCA was among the very first Colored Y's established in the United States, and when the National Board of the YWCA emerged in 1906 and surveyed the national landscape of YWCA work, its records noted the Baltimore Colored Y as one of four such city associations that merited recognition under the YWCA umbrella.[14] At that time the Baltimore CYWCA affiliated independently with the National Board and association between the local and the national organizations began at this time. By 1912 leaders of the CYWCA and the Baltimore YWCA met to consider branch status for the Colored Y under the umbrella of the Central Association (see Document 22). After brief negotiations leaders of the Colored Y chose affiliation rather than branch status, under an arrangement that appeared to be characteristic of structures the National Board was recommending for Colored Y's generally (see Documents 23 and 24) [15]. Eight years later, for reasons that are not entirely clear, the CYWCA petitioned the Baltimore YWCA to become a formal branch Y. Document 27B consists of the formal agreement by which the CYWCA became a branch of the Baltimore YWCA.

Still, branch status for the CYWCA did not clear up all the problems for Baltimore's Colored Y. Documents 28-31 provide evidence of persisting difficulties in the relationship between the white Central Association and the Black branch Y. Correspondence with Cordella Winn, an African-American staff member in the New York offices of the National Board, reveals communication problems across the racial divide. Leaders in the white Central Association apparently were unaware that the black secretary of the Colored branch, a Miss Carter, was leaving her position and did not respond promptly when the National Board recommended a possible candidate to replace her. The problem was not solved initially and the Colored branch closed its doors for more than three years. Finally, in January 1926, the Druid Hill Avenue branch reopened, with the ever-vigilant Cordella Winn, of the National Board, apparently very much involved in the developments that permitted this reopening (see Document 32 and Document 33).

The documents in this project offer windows into four decades of YWCA work in Baltimore. They show at once the similar concerns of white and Black middle-class women with the plight of working-class women in the city and the halting steps toward interracial cooperation that developed in the city's YWCA movement. Beginning as separate institutions, white and Black YWCA's merged in the years between 1912 and 1920, and with some rough spots along the way, managed to coordinate their efforts on behalf of white and Black working-class women and girls in Baltimore. In this process they provide us today a glimpse of the struggle to forge interracial reform movements in American cities in the early twentieth century. Building on a legacy of segregation, and not able to contemplate integration until the 1970s, still the YWCA movement constructed an interracial movement beginning in the 1910s and 1920s. Without these first, uneven efforts, the ultimate achievement of racial integration would not have been possible. The developments in Baltimore chronicled through these documents provide evidence of early efforts in this struggle and offer historians a grass-roots local view that is neccessary to construct a fuller narrative and interpretation of this larger process.